While my wife Lorie and I where working in VA at an outreach ministry, God began to speak to us about the dangers of bonfires. Meaning that the size of the fire changes its practical uses. The ministry up there grew so rapidly and the fire seem to spread so fast that it was mind boggling. The reality was, there was something missing, some thing that we knew as essential to christian life, and that was a true intimate relationship with Christ and fellow believers. You see, bonfires are powerful, look awesome, and you can see them from miles away. The flip side to that is they burn so hot that they often consume everything, they can easily get out of control, and you cant stand to close or you'll get burned. Worst of all, you can't take a log off of a raging bonfire and start another fire with it.

It was to this extent that God began to show us what His plan, His fire was like. A small campfire! Pastor Jeff has given a word about our friday night bible studies. They are called "Friday night by the fire". This reminded me of what God spoke about the small campfires and why they carry such big flames. You see, campfires are easily maintained, and you can get close to it, you can even pull a log off the fire to start a new fire some where else. The neat thing about getting close to the fire, is on those cold crisp nights when every one gathers by the fire, it ultimately brings people closer to each other. In John chapter 17 we see the real Lords prayer as He prays for Himself, His disciples, and us. There is but one common thread through out this powerful prayer and it culminates in this statement,"that they would be one". Bonfires force people apart, scatter the flock, and burn so quick with such massive heat that all they leave behind is a bunch of smoldering christians, if you follow me! The word is clear, we are keepers of the flame. We are to maintain this flame, guard this flame, and spread this flame as the Lord wills. 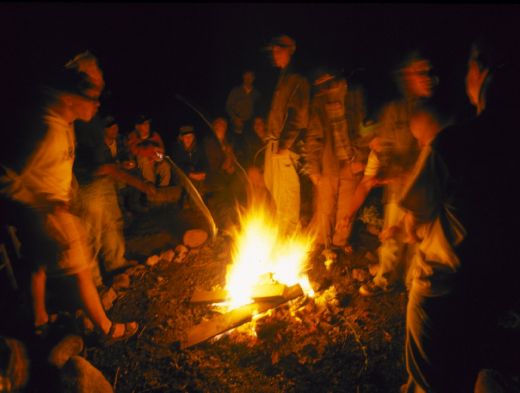 This just means starting more campfires as the Lord leads and watching our Lords prayer get answered as his bride becomes one again and he calls us up the the marriage supper of the Lamb and we will be wed to the creater of the universe forever. Amen!

P.S. - The term Bonfire was originally called bonefire. This was a pagan ritual during samhain where they sacrifice people in order to envoke the spirits of evil. The day after samhain was over, all that would be left  was a pile of ashes and bones of the sacrifices. This kinda reminds me of modern day church.Raging flames that leave nothing but smoking bones in its wake. Jesus pointed this out to the pharisees when He called them white washed tombs, saying that the outside is nice and clean but the inside is full of dead mans bones. These bonefires are raging through out the body of Christ and I believe that God Himself is going to put them out as He spreads His fire through out the land!  Campfires, remember little is much when God is in it!