What happened? What happened to our abundant aliveness? Are we spiritually acquiescing to living our life on the outer fringes of Grace? Are we simply content to live on the edges of God’s love? Have we allowed a wall of fear or doubt to come between our reality and Papa’s continuous kisses of intimacy through Jesus, by His Spirit?

The struggle of the centuries has been to free our souls from a narrow or jaded interpretation of Father’s love for us in Jesus. He is the very essence and…

A convergence of consensus

A Convergence of Consensus.

I have found many places in scripture that form the same stream of thought but with different words. The convergence of the practical with the spiritual  over laps again and again giving us an opportunity to excel still more. My themes reach towards the enlargement of the Christ community among us. I sense the changes that the winds are uncovering and take my limited voice and attempt to forewarn us… "May the Lord richly bless both you and your children.  May you be blessed by the Lord, who made heaven and earth.  The heavens belong to the Lord, but he has given the earth to all humanity. The dead cannot sing praises to the Lord, for they have gone into the silence of the grave. But we can praise the Lord both now and forever! Praise the Lord!" Psalm 115:14-18 (NLT)

The Real Media Bias-Important Info for Every Christian

These are excerpts from a CNN special report and are probably realistic numbers-Nate Silver numbers not Karl Rove numbers, for example.

By the President of the United States of America, a Proclamation.

Whereas it is the duty of all Nations to acknowledge the providence of Almighty God, to obey his will, to be grateful for his benefits, and humbly to…

Even if you are presently in the deepest fog of pain, shame, despair, fear, confusion, lack or sadness, He is coming over the mountain, running to you. Over the valley, through the dark of night; faith gives clarity to my heart-sight. Faith is the substance of things hoped for, the evidence of things not seen!

Through the eyes of faith, I can see all and who I am presently agonizing over turning and running to jump heart-first into His waiting embrace. The…

He Will Look After You 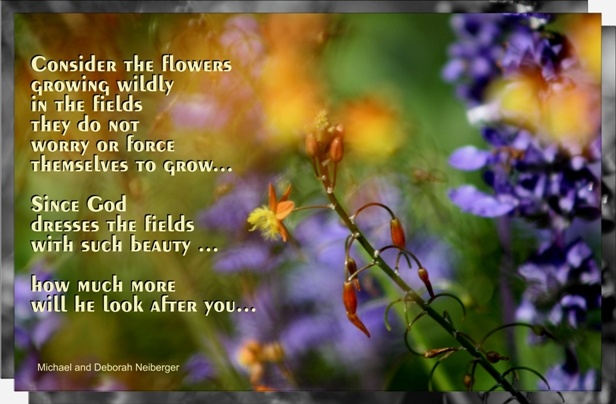 The more we look at God the more we will become like him because we shall behold him and reflect his image.  So, just as Jesus looked to the Father let us also look to him and not the things happening around us.  As…

An Essay on he Inner Journey

An Essay on Your Inner…

Becoming a Seeing and Hearing Child

My dear friend Ray shared some things with me recently that I wanted to pass on.…
Continue

The phrase that captures the premise of this book is that church one goes to just isn't enough or simply isn't 'it.'

A Word From C. Peter Wagner

A WORD FROM C. PETER WAGNER

Last Passover, Chuck Pierce gave me an assignment which has taken me many months to complete. You will read about the background in the essay itself. The more I thought about it, the more God seemed to bring to mind, so I decided to disregard the number of words it took me to express these…
Continue

Why was it “the best of times and the worst of times?” We are living in precisely that situation now, and the best will get better, and the worst will get worse. Both are preparing this world for the age to come, and we are here to be the messengers, so we must understand our times.

Every new day is filled with potential and challenges. When we learn that the challenges are where some of the greatest…

!Christians Rejoice!-last word from me to Bishop E.W. Jackson

The canidate who denies the diety of Jesus Christ, is complicite with the greed, power, control franchise of the global 1%ers (read anti-Kingdom of God) and denies the soveriegn, all knowing nature of Father God lost the presidential election.

Is there a more important agenda?

Oh, and the guy who did win is very…

According to studies Fox news viewers are less informed about current events than people who do not watch the news at all.